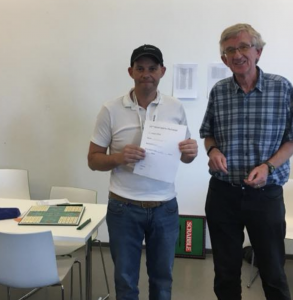 The MSO Scrabble tournament took place on the 19th of August, 2018. We started with 44 players with a good spread of geographical representation including players from Malaysia, and a number of European countries.  Tournament Scrabble is well-established in the UK and most of the players were seasoned competitors. However, there were a number of players who had never played tournament Scrabble before.  The early pace was set by David Shenkin who won both his two opening games by very big margins to record a spread after two games of over 700 points. David’s opposition in round 3 was somewhat tougher and he lost.  At lunch, nine players remained undefeated with Andrew Eames leading the field with a spread of 600. Also at lunch one of the new players found the going too tough, unsurprising given his first language was not English, and withdrew from the tournament.

The first game after lunch saw the number of undefeated players reduced to 5 with Andrew still in the lead with a spread of 870.  Round 5 saw the number of undefeated players reduced to 3 and a new leader in Craig Solomons, Andrew having been beaten by our Polish representative Rafal Gebbett, representing Romania maintained his undefeated record with a win against Andrew.  This left a final round showdown between Craig and Andrei to decide the winner of the gold medal. The spoils went to Craig with a victory by 191 points over his rival. Craig was a deserved gold medal winner with an average score over the seven games of over 500.  Three players finished on six wins. These were split by examining results against common opponents. All three had played Vince Boyle from Scotland with Andrei beating Vince by 66, Jin winning by 12 but Penny Downer losing by 179. So Penny was the unlucky one finishing fourth with Andrei taking Silver and Jin bronze.

My thanks go to all the competitors for making my job as tournament director/arbiter very easy and to James Burley who ran the computer in his usual efficient way.