I have just been tidying my house and organising the various over-stuffed drawers and cupboards and piles of stuff on the floors.

After going through everything, I am left with an odd glove, 13 odd socks and one unpaired chopstick.

What should I do with them?

There were plenty of ideas for things to do with each of the three items mentioned individually, but the most creative responses were those that incorporated all of them together, ideally taking into account the precise number of the socks. I particularly liked Dan Holloway’s absurdist adaptation of the idea of a sundial to create a lunar calendar with the socks marking out the 13 lunar months of the year, the chopstick as a gnomon, and the glove standing at the edge “to imitate a cockerel so that the moon will know to go away come morning and get rest before moving on to the next stage”.

Another of Dan’s ideas was to use the chopstick as a handling device and the glove to avoid leaving fingerprints, then “deposit each sock at the scene of local felonioes to spice up the theorizing of bored police”.

Peter Steggle produced a design for a terrifying children’s toy with 14 legs and a single giant hand. The glove, of course, forms the hand, 13 of the legs are socks and the 14th is an artificial leg made from the chopstick.

More than one contestant came up with the succinct idea of unravelling the wool from the socks then braking the chopstick in two to form a pair of knitting needles. Then you can knit the missing glove.

Britain won 67 medals at the Rio Olympics but this was achieved at a cost of £350million investment of public money which works out at over £5 million per medal. In this age of austerity, that seems very expensive. You are therefore invited by the UK government to come up with ideas to achieve similar success for less money.

The most common theme in the answers was drugs, which split into two types: one half suggested that it would cost far less than £350million to develop undetectable drugs to boost the performance of British athletes; the other half used the money for a variety of surreptitious methods of drugging other countries’ contestants, or their blood and urine samples, leading to theri disqualification.

Again Dan Holloway produced the overall most imaginative suggestions which included cryogenically freezing our medallists from Rio then thawing them out for 2020, which could also bring success in a competitive defrosting event. Dan also set his sights even higher with a suggestion to replace the official US national anthem recording with a Jedward party remix “to ensure  the most historically successful does all in its power not to win more than its first gold”.

Other suggestions including not leaving the EU but taking the chance to build a European super-state to include the UK whose combined effors would win even more medals. Or, as some suggested, we could achieve the same result by military means, rebuilding the British Empire to include the nations with the best athletes.

Resli Costabell had perhaps the simplest and most effective idea of infiltrating Tokyo with British taxi drivers who would take our rivals to Osaka instead of Tokyo. I also very much liked her idea of saving money on pole-vault training facilities by glueing together all the chopsticks from the frist question to make a pole. 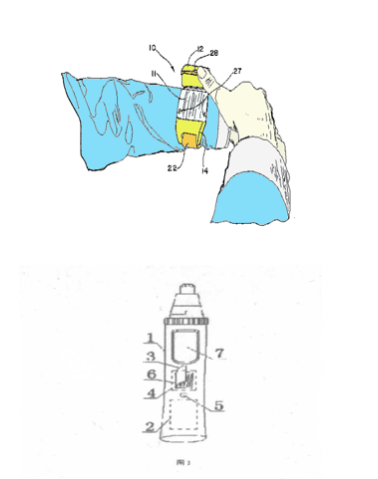 These two diagrams come from patent documents. The upper is a Swedish invention, the lower is Japanese. Their titles have one significant word in common.

What are they? What do they do? How do they work? And what is the word they have in common?

Nobody, I am pleased to say, came remotely close to the intended uses of these inventions. The word they had in common was “nose”. The first is a device to make it easier for people wearing ski clothing to wipe their noses (basically it’s a pad worn on the wrist with an absorbent pad that may be flicked open). The second is a combined nose hair trimmer and cigarette lighter.

Peter Steggle provided the most comprehensive explanation of what the devices were and how they worked together as part of a ghost-busting kit he called the GGPS (Ghouls and Ghosts Positioning System). With detailed explanations of the functions of all the numbered parts on both diagrams, he included a psychic wave detector and ectoplasm sampler in his ghost-trapping and neutralising mechanisms as well as a MortuoLinguo translator (lower diagram) to reveal the meanings of their ghoulish utterances.

Resli Costabell also outlined the functions of all the numbered parts, but thought that both items were disability aids. “The photo on top clearly shows a one-thumbed man strapping the device to the stump of another man’s leg,” she says. She did, however, make the interesting obsetvation that the Swedish invention (upper diagram) is in the blue and yellow colours of the Swedish flag while the lower diagram features the black-and-white of Japan. Even compared with Peter Steggle’s ghost detecrtor, however, her explanations were a little far-fetched.

Other ideas included devices to be used against alien invasion (Nandini Shiralkar), a means of changing the colour of clothes (Emily Watson) and a signalling device for drones (Pauline Lewis).

While walking round Cambridge market yesterday, I overheard the following snippets of conversation (not necessarily in this order), only one of which was addressed to me:

1: “From this hand to this shoulder round the back of the ball cage.”

2: “So I ended up naked and holding the lobster things over my boobs.”

3: “It’s nice to step in and step back out again sometimes.”

4. “Excuse me, are you the man from Gogglebox?”

I have a feeling there may be a link between them all, so your task is to blend them into a coherent narrative or plausible story.

I really did overhear all those lines in Cambridge the day before the Creativity competition. Number 2 was the first, and the temptation to use it in a question was irresistible.

Dan Holloway wove a gloriously incomprehensible postmodern narrative involving the incomprehensibly postmodern writer David Foster Wallace who wrote, among other things, a collection of essays entitled “Consider The Lobster”. His tale ended with the “lobster things over m,y boobs”, which I think is the right place for it. But he also managed to weave the other quotes into his tale, including the Gogglebox reference despite the fact that David Foster Wallace died before the programme was created.

Resli Costabell produced an equally convincing and ingenious (though somewhat deviant story) involving a woman who liked the feeling of a lobster’s tentacles or antennae on her breasts.

Peter Steggle’s tale involved a Japanese game-show in which contestants chose soft toys shaped like seafood, and then had to dodge ice lollies thrown by a man in a gorilla suit.

Strangely, it was the Gogglebox line that people found hardest to build into their stories convincingly, but a lot of lobsters were cooked in the tales.